The China-Africa Summit on September 3 and 4, 2018, has been another proof of how China is leading the global world of ideas.

“I have urged others not to ignore Africa, and I am glad that China is, most certainly, not ignoring our continent”,

Nana Akufo-Addo, president of Ghana, said at the summit in Beijing, which was formally the third Forum on China–Africa Cooperation (FOCAC).

Although Europeans are heavily criticizing the Chinese engagement in Africa, most of us would agree with Akufo-Addo in the sense, that Europe has to a certain extent ignored Africa.

Meanwhile, – in the last three decades or so – China has jumped in and filled the vacuum. The recent China-Africa Summit, with more than 30 African heads of states attending, has been another proof.

the Chinese President Xi Jinping put forward at his keynote speech at the opening ceremony of the China-Africa Summit.

“China follows the principle of giving more and taking less, giving before taking and giving without asking for return. With open arms, we welcome African countries aboard the express train of China’s development.”

Of course, these are nice words and reality turns always out to be different. But, China’s economic rising is one of the biggest economic success stories of modern times. This, per se, makes the Chinese role model highly attractive to African leaders.

Moreover, the success is based on an authoritarian political system. Which appeals to those African leaders who don’t want to give up their power.

Quite a statement. Promising a partnership between equals. Respecting the smaller partner and leaving leeway and autonomy. We can picture it as two “adult-egos” working together.

… from the European approach

In fact, that is the opposite of what Western policies do so far. We go for “Good Governance” and attach conditions to our aid money. With good reasons as we do not want to see the money back on Swiss bank accounts. We go for certain objectives and want to see real and sustainable results.

But, in a way, we seem to have overdone it. I don’t know exactly why, because of too much competition between donors, because of our colonial past, because of too much bureaucracy, or simply because of badly conceived programs, the Good Governance agenda isn’t working anymore. In many cases, the conditions we impose are not respected. In others, we provide aid to the poor and indirectly help to stabilize corrupt regimes.

However, our attempts to impose our governance ideas to the other side have had impacts on our relationships. We have been imposing our ideas and concepts. The other side wanted the money. Depending on the persons involved, sometimes a constructive collaboration emerged.

But this was the exception to the rule. The normal outcome was a relationship – in the terms of the transaction analysis – where the European side took more and more the role of a parents-ego and the African side was forced into the role of a child-ego.

That, of course, has increasingly annoyed and upset the African side. And in an interlinked global society African leaders can always turn to other partners.

China has been taking the lead

Thus, while Europe’s aid money is always welcome, African leaders’ hearts have turned away and found a more attractive partner who has offered a different mental model.

How China understands the world and has successfully modernized the economy on the basis of its authoritarian state capitalistic system, has become the new role model. Today, Ethiopia and Rwanda are well known African success stories. They have been following the Chinese path and have achieved an impressive economic modernization.

However, the story doesn’t stop there. At the recent China-Africa Summit, Nana Akufo-Addo, the progressive president of the – still – liberal Ghana has announced that Ghana is “inspired by this [Chinese] model, and … trying to replicate [the] same.”

We have to admit that China has been leading the global world of ideas already for quite some time. Not only in Africa.

And we should keep in mind: Who is leading the world of ideas today, will even more be leading the real world of politics and the economy tomorrow.

Why, nevertheless, Europe could break the Chinese domination as a role model for African countries, you will read in a future blogpost. 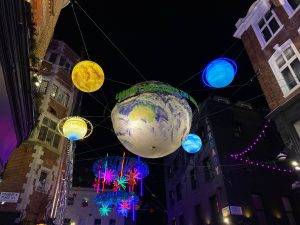