“The Next Factory of the World: How Chinese Investment is reshaping Africa” by Irene Yuan Sun,

Some 70 people gathered at the Viennese Rathaus and listened to the eloquent young Chinese-American author. Irene Yuan Sun grew up in China until she was six, then emigrated to the US, where she went to school and finally graduated at Harvard College, Harvard Business School, and Harvard Kennedy School.

Today, Irene Yuan Sun co-leads McKinsey & Company’s research and client work on Africa-China business and economic development. She has worked at the interface between Chinese and African economic realities. And she had the unique opportunity to visit some 50 Chinese factories in Lesotho, Nigeria, Kenya and other African countries.

Her book discusses how Chinese entrepreneurs – together with African partners and workers – are building in Africa what they learnt to build in China: A global manufacturing powerhouse. This new phenomenon gives rise to the tantalizing possibility of an industrial revolution in Africa that could lift hundreds of millions out of poverty.

An African industrialization through Chinese entrepreneurs …

… that is the theses put forward by Irene Yuan Sun.

What a surprise for Europeans! We have been used to criticize the Chinese involvement in Africa: too greedy, too much looking on their own interests, too much exploiting natural resources, plus local people, violating human rights, sending cheap plastic products, and so on.

But the reality seems to be very different. Without Chinese interventions, no “Africa rising” would have happened. First, Chinese began to build infrastructures in African countries on a massive scale.  Whilst Europeans were contemplating certain projects for years or even decades, China just started to build roads, railways, airports, buildings, even urban public transport infrastructures. Then we were criticizing the quality. Instead of seeing that they were building what Africans wanted and needed. While we were not.

For decades Western style development politics has been incentivising European companies to invest in African countries. But only a few did. Instead, we were criticizing African countries for not providing enough physical and institutional infrastructures.

But Chinese entrepreneurs have invested nevertheless. They seem to follow a different development model. If they see an opportunity, they go for it. More than 10.000 Chinese companies are already doing business in African countries, more than 1000 have built factories.

Whereas our model seems to be that we firstly need almost perfect conditions – from infrastructure to rule of law, from democracy to “good governance”. And only then we would go and invest.

Guess, who is changing the world?

Organizers of the book presentation:

The event was organized in the course of the 9th Global Peter Drucker Forum, which took place in Vienna on November 16th and 17th, 2017. 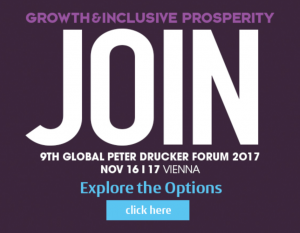